10 facts about the anime 'One Piece' that you don't know, had a conflict with 'Naruto' - Navigasi Game a --> Lompat ke konten Lompat ke sidebar Lompat ke footer
Beranda / Anime

10 facts about the anime 'One Piece' that you don't know, had a conflict with 'Naruto'

Gnotif - It is undeniable that One Piece is one of the most successful Japanese manga and anime. Not only domestically, the adventure story of a pirate named Monkey D Luffy even has a huge fanbase around the world. 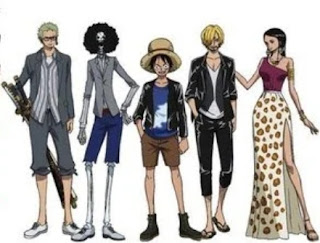 Until now, both the manga and anime are still continuing and there seems to be no sign of ending even though the number has reached hundreds. Apart from the main story, there have also been a number of successful stand-alone or spin-off film titles.
Now after decades of airing with hundreds of chapters and episodes, One Piece has many interesting facts that you may not know much, as reported by the Screenrant website. Anything? Check out the following list ...

The One Piece manga has been released since 1997 and each volume seems to invite readers to join in on an adventure into the world of pirates which is so exciting. Variety of characters, exciting battles, to the development of such a detailed and continuous story are the mainstays of this manga by Eiichiro Oda.
Departing from these facts, it's no wonder that One Piece has finally been named the most successful manga of all time in Japan. In fact, the One Piece manga was also included in The Guinness Book of World Records in the category of 'Most Series Ever Published by an Author' in 2014.

2. Initially it was only planned to last for 5 years

Most comic artists or mangais start their careers because they really like what they do. However, it is different from Eiichiro Oda, who in fact only has one choice in his life, namely to become a mangaist.
In an interview in the past, Oda dreamed of becoming a manga writer since he was 4 years old. The reason is simple, so that he can avoid full-time work in the real world. Although it may sound absurd, but in fact his dream has come true!
Even during his career as a manga writer, Oda has received various awards.

Every comic artist or mangaist must have their own references for story ideas or art styles. And Oda himself actually grew up as a big fan of the anime Vicky the Viking which also tells about the world of pirates.
In addition, Oda also admitted that he is a big fan of Akira Toriyama, who is the creator of the legendary Dragon Ball manga. It is no wonder that in the end Oda was very inspired and made the Dragon Ball characters a reference for his One Piece character.
Even after the success of his career, Oda was finally able to collaborate with the idol, Akira Toriyama on several occasions.

5. Changes in One Piece Character Design and Story

Before starting to publish a title, mangaists must have a blueprint or sketch of each character. Uniquely, there are lots of designs that Oda has to change for each character in the One Piece world.
One example is Tony Tony Chopper who was previously described as a more realistic deer animal. In addition there is also the character Nami who was originally depicted with a cybord arm and carrying a large ax weapon.
Meanwhile, Zoro is actually planning to become one of the pirate members of the Buggy Clown. However, all of the plans eventually underwent a total change, both in terms of visuals and stories.

6. 'Conflict' with the Naruto Manga

Maybe not many people know that Sanji's character was originally plotted with the name Naruto. But right before the manga was officially released, Oda's rival in the manga world, Masashi Kishimoto, published a ninja-themed anime series called Naruto. Not wanting to be confused in the future, Oda relented and changed Naruto's name to Sanji.
Oda and Masashi are indeed tough rivals, considering that One Piece and Naruto are 2 manga titles that are selling so well all over the world. However, one thing that should be noted, the rivalry between the two is just a job. Beyond that, both of them have great respect for each other.

One of the most impressive things in the world of One Piece is the large number of characters you can meet. In fact, each of them has a back story that is so deep and interesting to listen to.
It cannot be denied that many of the One Piece characters are also inspired by pirates in the real world! One of the most obvious is the character Gol D Rogers, who before his execution announced that he was hiding a treasure called One Piece for the pirates to find. This story is inspired by the pirate from France, Olivier Levasseur, who at the end of his life throws a puzzle necklace at a crowd of people and challenges them to solve the puzzle inside. The prize? The mysterious Olivier's treasure.
In addition, the characters Blackbeard (Marshall D Teach) and Whitebeard (Edward Newgate) were also inspired by a pirate named Edward Teach. Then there are Captain Alvida who was inspired by pirates in the 5th century, Alwilda to Captain Jewelry Bonney who was inspired by the pirate Anne Bonny.

8. Graves of One Piece Figures in the Real World

Throughout the story, One Piece has presented several sad stories that have succeeded in making fans' hearts upset. Some of the most unforgettable, of course, the death of 2 idol figures, Whitebeard and also Portgas D Ace.
It may sound strange, but the death of both of them in the manga world is also mourned by the public, especially fans in the real world. Based on that fact, in 2013 Universal Studios Japan built a replica grave of Whitebeard and Ace at one of the annual One Piece shows.

Because of the popularity of the One Piece manga, each character must have huge fans in the real world. This means that One Piece characters have high value in the eyes of the public, making them the right role models for promotion.
One of the popular fashion brands, Armani, even took One Piece to collaborate in 2009, to be precise for the promotion of a big screen film titled One Piece: The Storng World. In one of the special edition magazines, Luffy CS is designed with Armani's cool and contemporary clothes.
The collaboration between the two proved to be successful, considering that Armani took One Piece again to collaborate as a forum for the 2012 promo in the film titled One Piece Film Z.

10.Luffy to be the 2020 Tokyo Summer Olympics Brand Ambassador

It's no secret that Japan has been appointed to host the 2020 Summer Olympics. And apparently, there is a super unique concept being prepared by the organizers.
Yes, the committee will make iconic figures in the world of anime, manga, and even video games to become brand ambassadors for the Tokyo Summer Olympics 2020. Of course, the character Luffy who is the main protagonist of One Piece is also one of them.
Some other popular figures who are also on the list are Astro Boy, Sailor Moon, Shin-chan, Naruto, Goku and many others. Do you know any other interesting facts about One Piece? Share in the comments column!