Navigasi Game - Who doesn't know Doraemon? This cute & adorable cat robot cartoon figure has indeed become a "Cross Generation" figure. Just try asking Grandma, Mother, Uncle, Auntie, etc. everyone will know & be responsive plus put on a happy smile when asked or told to discuss this anime / manga character made by the duo Fujiko Fujio . 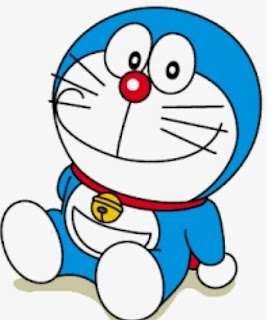 Well ... for a Doramaniac !! Come on, let's add your knowledge about this blue cat robot with some interesting facts about Doraemon that have been collected from various sources.

1. What does the name Doraemon mean?

2. What is the Doraemon production code?

Doraemon has a production code it turns out, namely MS-903. This is Doraemon's real name as a robot, and it is with this name that he is called by the owner of the robot factory where it is produced.
This name was mentioned in Doraemon's birthday episode in 2007.

3. When was Doraemon born?

September 3, 2112 is the date on which Doraemon finished production

5. Who is Doraemon's ex-girlfriend in the 22nd century?

Noramyako. He was mentioned in Doraemon's Bonus Data in Tankoubon volume 11. Noramyako decided Doraemon because Doraemon was too short for him (after his ears were bitten by rats)

6. What is Doraemon's original color?

Doraemon's original paint color is yellow. After learning that his ear was bitten by a mouse, he, in a depression, sneaks up on the tower, where he drinks a potion labeled "sadness". when she cried, the yellow color faded & her voice changed because of the potion. In my opinion, maybe the Doraemon anime maker is good at English, because they understand the English term "In Blue" which means "being sad".

7. Is Doraemon a perfect cat robot?

Not. In fact, Doraemon is actually a sub-standard product, aka "obsolete robot" because many of its spare parts are not functioning properly. for example, his radar whiskers & his cat calling bell.

8. How is Doraemon's achievement at school?

doraemon does poorly at robot school & during the final presentation, he looks bad & no one wants to hire him… (poor kid…), until baby Sewaishi (Nobita's great-grandson) pushes the button. his parents were a little reluctant, but because Sewashi liked him, they hired Doraemon, & he took care of him until Sewaishi himself sent him to the past to take care of Nobita, and this is where the adventure of our favorite character with Nobita begins ...

9. How many tools in Doraemon's pocket so far?

Approximately 4500 tools (dōgu) have been removed from the doraemon's pouch starting from the first episode to date, including the most popular being "Doko Demo Doa" (Door to Anywhere), Take-copter (Bamboo Propeller), Kuukihou (Cannon GunWind) & Time Machine (Time Machine)

Doraemon's turn on / off button is a switch in the shape of a small, round ball that becomes its tail

11. Doraemon's hands are so round, how come they can hold things?

Doraemon's hand has extraordinary adhesive & vacuum power so that any object can stick to his hand [from Doraemon no Himitsu, in Doraemon volume 11] The technology used in his hand is similar to the earth's gravitational forceon a mini scale.

12. Why are Doraemon and Dorami said to be brother & sister?

This is an interesting mystery… why are Doraemon and Dorami called brothers? apparently, because they were both "born" from the same oil tank ... and "Doraemon" was born earlier than Dorami (2 years older), so he was called "big brother", then Dorami was also hired by the Sewashi family after Doraemon ,so she is called "little sister."

According to the data, Dorami is better than Doraemon ... Dorami is capable of producing 10000 horsepower of energy, please compare it with Doraemon, which can only produce 129.3 horsepower (Doraemon's hockey figure)
but if "which is more popular ...?", I think you know for yourself. . .

14. Why is Dorami better than Doraemon, her brother?

There's something funny about this… where the scientist who made Doraemon and Dorami say that the oil used to make this “brother” type robot, one of the layers will stagnate and sink down. .this lower layer will result in a better quality cat robot.
This fact explains that Dorami is most likely a better robot than Doraemon because Dorami was created after Doraemon (about 2 years later), or in short… Doraemon was made with a top layer of oil and Doramimade with a lower layer of oil, which is better quality, even though they are born from 1 oil tank .

Google Japan also celebrates Doraemon's birthday which falls on September 3, 2009. Doraemon was born in 2112 so actually Doraemon isn't born yet.