Navigasi Game - What if the Harvest moon game is combined with Doraemon? The question was finally answered by three big companies, namely Marvel, Brownies, and Bandai by collaborating to make a game called Doraemon Story of Seasons. 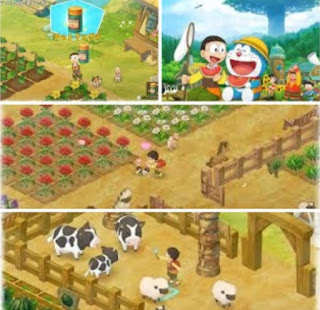 The plot of the Doraemon Story Of Seasons story

The plot of the story begins with the occurrence of a summer vacation at Nobita's school which is full of boredom and laziness.
Until one day Nobita found plant seeds that he got in the hill behind the school and Nobita planted the seeds he found in that place.
Until one day the plant grows into a giant tree that attracts Nobita, Doraemon, Suneo, Giant, and Shizuka into another world (isekai).
This requires them to manage a plot of land given to them by the villagers so that they can survive in this world by farming and raising livestock like the Harvest moon game.